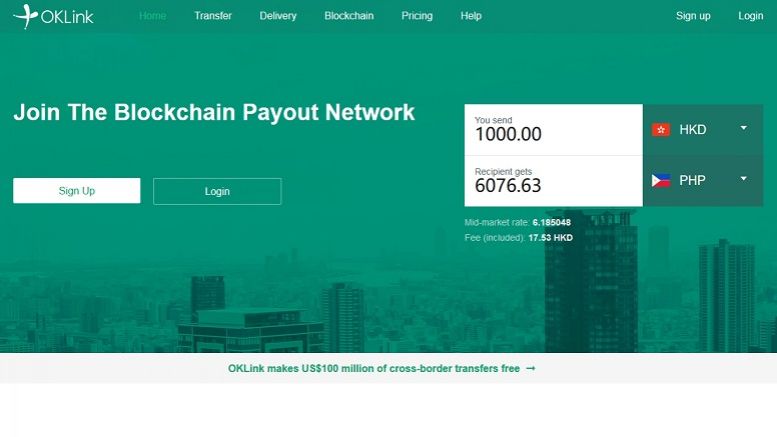 OKLink, the global blockchain money transfer network, announced today that it will subsidize all fees on the first US$100,000 of cross-border transfers for every partner on the OKLink network, up to a total of US$100 million. The initiative incentivizes money transfer companies to offer their customers the cheapest, fastest, and most transparent global remittance services.

Hong Kong-based OKLink empowers transfer and delivery companies to provide senders and recipients a superior experience on low-value transfers in their local currency. OKLink’s platform is built on the trust of the blockchain, using digital assets to settle among participants in an instant, secure, and transparent manner. It eliminates the need for pre-funding by settling every transaction in real-time using stable and native digital assets.

OKLink currently offers payouts in fifteen countries across Asia, the Americas and Africa.

“The world's financial transfers run on antiquated technology built nearly half a century ago. Slow, costly, and favoring large sized transactions, these qualities are in contrast to the emerging payment needs of today’s ever-connected global economy. OKLink believes in a future where small-value cross-border transfers will be as simple, fast, and cheap as a text message.

“We are thrilled with the reception OKLink has received from industry leading companies and we hope to support their growth further with this incentive promotion.”

Starting from today, participating companies on OKLink will be able to service individual payouts at the mid-market exchange rate for the first US$100,000 of transactions. Transactions under US$500 will qualify for the subsidy. Eligible companies must sign up by December 31, 2016 and have until March 31, 2017 to complete the free transfers.

Coinsecure, Coins.ph, Rebit, MOIN.Inc, Coinone, Coinplug, Coincheck, Bitoex and BitPesa, are among the early companies to join the OKLink network and take advantage of this initiative.

A selection of quotes from OKLink partner companies is provided below.

“India holds the largest share of remittances around the globe with over US$70 billion of inward remittance in 2015 at an average fee of 6 percent.  What Coinsecure and OKLink plan to do - is going to be phenomenal.”

Ron Hose, CEO of Coins.ph in the Philippines, said,

“We are very excited to allow our existing user base of over 500,000 customers in South East Asia to remit funds to Japan, China and South Korea using OKLink's platform, supporting our joint vision of providing cheaper cross-border payments and remittances across the region."

John Bailon, CEO of Rebit in the Philippines, said,

“Rebit first pioneered using Bitcoin for remittances. We’re very excited to join the OKLink network, whose resources and influence will create a strong alliance of companies committed to making Blockchain remittances work for any customer, anywhere in the world.”

"OKLink has developed a new and revolutionary way to solve problems in the traditional money transfer system. MOIN is very proud to be a partner of OKLink. The partnership will enable Korean people to send money abroad cheaper, faster, and more conveniently. OKLink is going to become the future of global remittance, connecting the world much closer."

“This is a very meaningful milestone for blockchain technology, which is closely watched by regulators and practitioners from all over the world. Finally the technology has moved away from the concept phase and into the real usage phase.”

“Coinplug is very excited to work with OKLink in building the next generation global settlement network. We expect the market to grow significantly in micro-sized overseas remittances and we are preparing to be a dominant early mover with this partnership with OKLink.”

“We are excited to partner with OKLink. We believe blockchain based remittance will have a huge impact on the finance industry especially for people who do small transactions on a regular basis.”

“OKLink is an important partner for money transfer companies in Asia. Bitoex has more than 5000 locations in Taiwan. Our partnership with OKLink will help us expand the scope of our global remittance offerings and bring an unparalleled customer experience for the 600,000 expatriates in Taiwan."

OKLink is a Hong Kong-based global blockchain money transfer network that gives every remittance and payment company the same cost advantage, global reach, and speed that took Western Union many decades to build. The company leverages the trust of the blockchain to connect and enable transactions between transfer and delivery companies worldwide using blockchain anchored digital assets and multi-signature technology.

Launched in August 2016, OKLink is growing rapidly with a payout network that is currently available in fifteen countries across Asia, Africa and the Americas. OKLink is a part of the OKCoin family of companies.  OKCoin is the largest digital asset exchange in China. The company raised US$10 million in its Series A round.

- Young, Dynamic and Poised for Growth: BillPro is the Face of EU Cross-Border Ecommerce 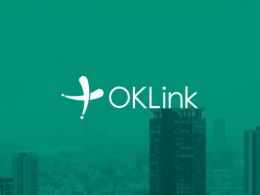 OKLink, a Hong Kong-based global blockchain money network, is offering $100 million in free remittance trades to international remittance companies in order to promote remittance payments and accelerate the growth of new money transfer companies. Remittance payments — earnings which foreign workers send home to their families around the world — may be one of the best use cases for digital currencies. The remittance market is estimated at $500 billion. Jack C. Liu, Co-creator at OKCoin, one of the world’s largest bitcoin trading exchanges, and Chief Strategy Officer at its subsidiary,.... PRESS RELEASE. To simplify banking and meet its users’ Remittance needs across the globe, Remitano, a global escrow-marketplace, has just launched a smart, free, and safe approach for cross-border money transfers. This system will allow users to send and receive money from other countries without incurring the high fees charged by most traditional banks. Remitano exchange now doubles as both a speed bank and a digital store to mitigate against losses from inflation. Free Remittance and Cheaper Average Costs for Global Money Transfers As a result of the launch of Remitano’s.... 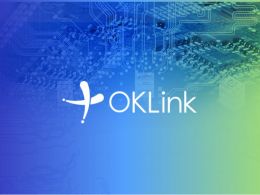 In October 2015 Bitcoin Magazine covered the launch of OKLink, an open digital wallet created by Chinese Bitcoin exchange OKCoin, designed to allow national and digital currencies to instantly transact across borders and currencies, with no fees. “We can hide Bitcoin technology in the background,” said OKLink Chief Strategy Officer, Jack Liu, “and that’s what we have launched with a product called OKLink: a mobile wallet that allows you to hold a more comfortable type of value, like USD or CNY, but transact over the Bitcoin network.” Now incorporated as a subsidiary in Hong Kong and.... 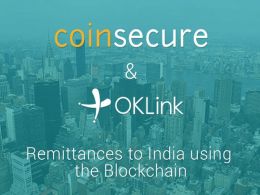 Coinsecure and OKLink Partner for Bitcoin Remittance Service in India

Indian Bitcoin company Coinsecure has announced a partnerships with OKCoin’s OKLink service. This partnership is intended to bring “blockchain technology powered remittance services in India,” Coinsecure said in a press release. Coinsecure, OKLink Partner in New Remittance Service. This partnership is part of an initiative by the new OKLink service to “provide [a] digital assets and blockchain based global transaction settlement system,” Coinsecure said in a press release. Furthermore, the company said, “with India being the largest inward remittance receiving country in the world, this.... 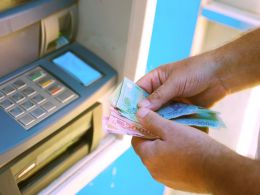 Hong Kong-based blockchain settlements platform OKLink is now available in Vietnam, enabling international remittances with near-instant settlements over both local fiat currency and bitcoin. With 6.8% of its total GDP in inward remittance, Vietnam is a market ripe for disruption in the space, with emerging FinTech innovations offering the potential for near-instant, low-cost settlements. OKLink, a sister company of major digital currency exchange OKCoin, will now enable senders to transfer up to $10,000 to Vietnam at a relatively modest delivery fee of 0.5%, calculated at a mid-market....
Bitcoin