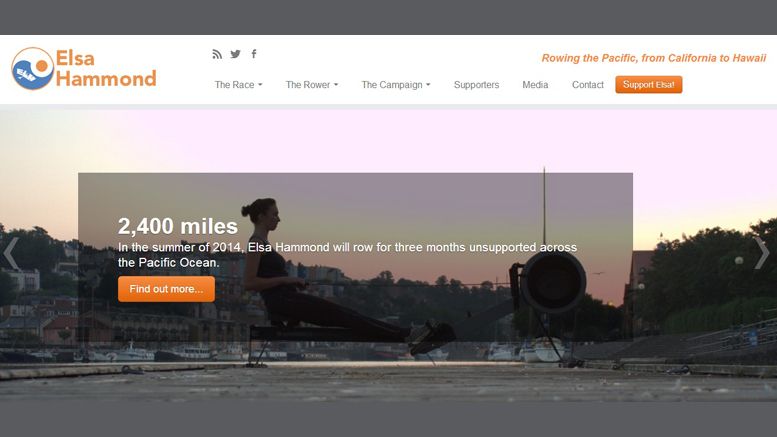 On 7 June 2014, Elsa Hammond will depart from Monterey Bay, California to row 2,400 miles across the Pacific Ocean to Hawaii. She is competing in the Great Pacific Race 2014, the first ever rowing race in the Pacific Ocean. Rowing solo and unsupported,

Elsa will be alone at sea for up to three months. This is the first ocean rowing race to attempt the largest ocean in the world, and the odds are high that the current world record for this course will be broken. Of the ten women who have ever rowed an ocean alone, only two have rowed the Pacific. Unlike the Atlantic, these waters are not tried and tested by many races. There are no engines or sails – instead, Elsa will rely on her own muscle to propel her boat 2400 miles to Hawaii.

As well as passing through a great white shark breeding area…the race will take Elsa just south of the ‘great Pacific garbage patch’, the most notorious example of concentrated plastic pollution in the world. Each generation has its challenge to face; environmental sustainability and climate change are ours. Elsa is supporting the Plastic Oceans Foundation, a charity that works to raise awareness of plastic pollution in our oceans, and to combat the issue through a range of solutions and projects. Plastic pollution is a problem on many levels, detrimental to the environment, world economy, and human health, and Elsa is keen to raise awareness of this issue through her blog and updates during the row, as well as in schools on her return.

The row is a high-profile event, which presents a variety of opportunities for publicity and recognition in a range of media on both sides of the Atlantic. The race itself has international appeal – being organised from the UK, taking place across the US, with a wide field of international entrants. Elsa is already using a range of social media to promote her campaign, and she will be tweeting, posting and audio-blogging throughout the challenge (using Satellite connection when out on the Pacific).

Elsa’s Pacific Solo Row is now also open to sponsorship and donations in Bitcoin (http://elsahammond.com/donate). A high-value and publicly visible project like this could be a great way to raise awareness of Bitcoin. With the current media stories focusing on lost wallets and unsavoury commerce, the more positive Bitcoin-related stories in as wide-ranging fields as possible, the better.

Please get in contact with Elsa if you are interested in getting involved in this adventure and helping to raise the positive profile of Bitcoin.

To learn more about Elsa Hammond please go to: http://elsahammond.com/ 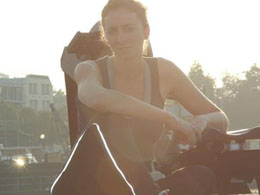 In June 2014, Elsa Hammond will attempt to row across the pacific ocean, from Monterey Bay in California to Hawaii, a distance of over 2,400 miles, as part of the Great Pacific Race 2014. Hammond expects to spend about three months at sea and she will row on average for 16 hours a day. Her goal is to beat the current record of 99 days and as part of her effort she is raising money for the Plastic Oceans Foundation. Blockchain Sponsorship and Pizza. Hammond reached out to the Bitcoin community in November, and Blockchain.info agreed todonate to the cause. Nicolas Carey from Blockchain says.... 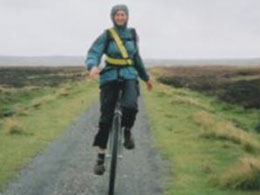 Source: ElsaHammond.com. Rower Elsa Hammond is planning to row her way through part of the Pacific Ocean from Monterey Bay, California to Hawaii. It's a a 2,800-mile journey, and it'll all be propelled with Hammond's own body strength. In preparation, Hammond needs to raise £100,000 (or just over $160,000 USD) to make the journey happen. As such, she's decided to accept bitcoin donations. As of this writing, Hammond has managed to raise 6.41174 BTC to her donation address, nearly $4,000 USD. Blockchain.info has even joined in on the fun, becoming one of Hammond's sponsors. Excess funds.... 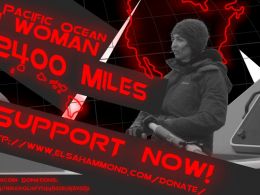 The Great Pacific Race 2014 is the world's first rowing race across the Pacific Ocean. Teams of one, two, and four will compete in a journey to row across the Pacific Ocean from Monterey, California to Honolulu, Hawaii. The race is expected to take anywhere from 30 to 90 days based on crew size in the boats. The racer's boats are only powered by muscle without any help from sails or engines. Ultracoin and Bitcoin Woman Magazine are pairing up to sponsor racerElsa Hammond for the race that will last up to three months. Ultracoin is an Altcoin with a blazing fast transaction time of six....

Sponsorship deals have become part of the measures that crypto-related companies employ in widening the knowledge and acceptance of cryptocurrency, one of the recent deals in the Australian Football League (AFL) and Crypto.com. Most of these sponsorships have been on sporting teams, with more football and basketball. This deal comes as the number 1 primary crypto sports sponsorship for AFL as this deal with Crypto.com will be backing its women’s league (AFLW). The sponsorship deal, about $25 million, is expected to last for five years. It depicts an increase from the current $18.5.... Out of All the American States Study Shows Hawaii Expressed the Most Crypto D...

A report published by the independent marketing intelligence company, Miq Digital, explains that Hawaii has seen the most crypto demand of all the states in the U.S., with a 687% increase since 2020. As far as increased cryptocurrency demand since last year, Nevada, California, Florida, and Colorado followed the island state with increases of over 600% as well. Hawaiian Interest in Crypto Skyrockets, Americans Love Dogecoin, Crypto Acceptance Among American Merchants Increases The independent marketing intelligence firm Miq Digital has published a research report on interest in....
Bitcoin